Halloween is an old traditional holiday celebrated on November 1st. People believed that the souls of the dead come back to earth to visit their families or friends.

People began to call November 1st as a holy or „Hallowed“ day. It was to be called All Hallow‘s Day. Which was later shortened to what we know today as Halloween. Nowadays in North America people wear spooky costumes and children go around the neighbourhood to Trick-or-Treat. 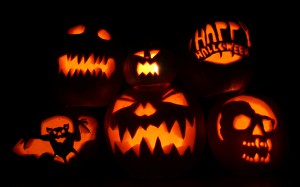 This originated with a ninth-century European custom called „souling“. All Souls Day (November 2), early Christians used to walk from village to village begging for „soul cakes“. These cakes were made out of square pieces of bread with currants. Today children usualy get candy and chocolate. Typical symbol of Halloween is Jack O’ L antern – pumpkin carved in a shape of scarry face with a candle inside. There is an old legend about Jack and the Devil. The story tells us how these lanterns of pumpkins originated.